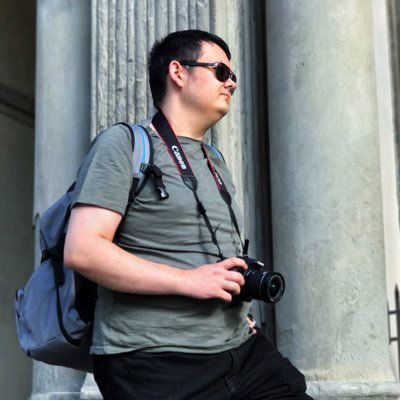 What’s up! My name is Lee Kemp, aka Lee Explores, and I’m 22 years old currently living not too far from London in the UK. I predominantly do travel vlogs and abandoned building videos.

When did you first discover your passion for videography?

I’ve always had a passion for photography ever since a young age. I think I had my first camera, which was a film camera, when I was 5 or 6 (2001/2002). There was always a joy of taking images and not knowing if you did frame it right or if the lighting was right or not. The best part though was when you take the film in to be developed as you knew you were one step closer to seeing your work come to life!

As my love for photography grew, so did my technique and equipment. I ended up taking a course at sixth form college on photography in 2011. This led me to creating my own photography company in April of 2012. Within a couple of months I got my first wedding booking and within a couple of years I had done 3 more and various other shoots.

Due to the rapid increase in photographers I ended up getting no work because the competition had increased within my town. Around 2015 I had completely stopped with the business. However, this didn’t stop me with my passion – I was still continuing this.

In 2016 I travelled to various places and it wasn’t until around late August that I decided that it would be good to video my adventures. When scrolling through YouTube videos I came across three YouTubers who to this day still inspire me to create better content.

The first was Casey Neistat who is a daily vlogger based in New York City. His cinematography initially attracted me with epic drone shots over the city and how exciting his everyday life seemed through these videos. The second was Exploring With Josh who really brought out my love for all things abandoned. The one thing I admire about him is that nothing will get him down and that anything is truly possible. The third is Fun For Louis who inspired me to travel the world – there isn’t many places that Louis hasn’t travelled to!

I ended up creating my new account around mid-August 2016. I come up with the channel name “UK Exploration” but within minutes YouTube had decided to ban me for somehow violating terms of service. After numerous attempts to unban the account I gave up and began to think of a new channel name. One that was personal but also hinted at what I would do.

So on Friday 25th August 2016 I created my channel Lee Explores. This too was banned at first, but this time I managed to get in contact with YouTube by email and got it unbanned quickly. The same excuse was used by them that I had somehow violated their terms.

Why did you choose abandoned places as the main theme for your videos?

Although to date I have only done one abandoned video, with the rest being predominantly travel vlogs, I have chose abandoned places for a few reasons. On Friday 20th October 2016 I uploaded my first abandoned video which was of a former prison which had been closed for the past 3 years.

Before this I can’t remember if I have been in abandoned places before or not. But I had certainly been past a lot. As I grew older though, I started to admire them more and also became interested in both what was inside and what it used to be. The thought of all those who had walked through the building or what events happened inside got me interested.

My desire to record abandoned places was purely for historical basis, aside for my own curiosity. Not many buildings last when they’re abandoned. Some will decay for decades while others will simply be torn down within a couple of years. My aim is to capture as many buildings as I can before these get demolished and forgotten forever.

What has been your career highlight so far?

That was until YouTube tweeted me with an Open House event that they were hosting in February 2017. This was open to anybody with a YouTube channel, regardless of subscriber numbers. Naturally I emailed them requesting a ticket as soon as I could.

Tickets had closed the day before my friend Ben decided he would come along with me. I thought I would chance it and send in another email asking if I could add a plus one. I had received an email saying that unfortunately it was not possible due to the numbers. This did not deter me – I sent off another email. This time I received a reply from someone higher up who gave the green light for me to bring him along.

On the 2nd February 2017 we travelled down and spent a good few hours trying to find a place to park. We ended up queueing for the best part of half an hour and made a very good friend while waiting called Pauly James. The three of us decided to explore the place and mingle together.

Through this I met some amazing people and made some great friends for life. You can find the video of the night here below.

What are the plans for your channel?

In August 2017 I plan on going down to London for 4 days to a YouTube event called Summer In The City. It’s held at ExCel London and starts with creators day. This is where all YouTubers get to meet together, have a laugh and potentially exchange details for collabs etc. The next couple of days is then open to the public where they can come in and meet up with their favourite YouTuber, have a go on the indoor fairground or visit one of the many panels and Q&A’s.

In between I have plans on visiting many more abandoned places. There’s a lot I have in mind but these are to be kept a secret until the videos are recorded. Also due to popular demand, I have a plan to visit Epping Forest to make a part 2 of my video, the first can be found here below.

Next year should see more spectacular things including VidCon!

How do you make sure your video content is different and stands out?

The key to getting noticed is to obviously stand out from the crowd. You have to put your own angle on things and that includes how you shoot. It doesn’t necessarily have to mean sitting indoors to do videos. You can go outdoors into the woods or even stand in your town centre to do it.

How I try to stand out is through my content. Now stuff like my style of recording, editing and how I create my thumbnails is also important but none of that matters if I haven’t got interesting content. Sometimes I can spend quite a bit of time trying to figure out what I want to get from the days video. Often a few days of planning will go into some whereas others will just be completely spontaneous.

What are the main challenges you have encountered so far in your career?

The main challenge so far has been to get people to subscribe to me and to view my content. At the start of January 2017 I was only on 7 subscribers and this was after being on YouTube for only 7 months. After I went to the YouTube Space I grew at quite a pace.

One of my highest viewed videos was when I done the 24 hour challenge in the forest. This was because I had uploaded it at the prime time of those types of videos being popular. However, to date it has only got near to 600 views, whereas other 24 hour challenges have gotten around 60,000 or upwards towards a million. It really is a hit or miss whether or not a large mass of people will watch my videos or be interested.

What would you recommend to budding videographers planning to start
their own YouTube channel?

If you’re only just starting out I would recommend you don’t just go and splash all of your money on the best equipment you can. I’ve done this to start with. I first started with a Canon 700D with a 18-55mm lens and a Manfrotto compact tripod. After this I then purchased a Rode Videomic Pro and a Joby Gorillapod.

Then I thought how would I edit my video as I wasn’t like every other YouTuber – I only had a Microsoft computer. So obviously I went out and purchased an Apple MacBook Pro at an extortionate cost. Now obviously this meant I could edit better videos with more advanced software, but was it needed? Probably not. I’ve learnt that there are still some really good editing suites on Microsoft computers.

I then decided it was time to purchase a wider angled lens to help capture more of my surrounding areas when vlogging. I opted for the 10-18mm Canon lens as this was more affordable than the 10-22mm.

After all of these purchases, to better my production, I then decided I would get a Canon G7X II. This was a really good investment though and I would highly recommend it to new YouTubers, if your budget can extend to it. It’s small enough to avoid getting a lot of attention drawn to you that you may do with a larger camera setup. It also has about the same quality and autofocus as a larger DSLR.

The first thing you need to do is come up with a theme for your channel, if it’s to have one. Are you going to just do beauty videos? Are you a gamer? Or are you going to do daily vlogs? I would then suggest you come up with a name that suitably fits this or just use your name if you can’t think of anything.

You should get together some ideas of videos that you want to film. Now this could be reviewing your favourite mascara, how to prestige in Call of Duty or your trip to London. There is no right or wrong when it comes to what you upload as it’s what makes you unique and stand out from the crowd.

Finally a note to self is needed to remember that not everyone will like you or what you do, but that’s okay. You’ll get people who aren’t willing to support you or who laugh at you but with success and progression comes jealousy.

Note from the Editor

YouTube has strict policies regarding the use of their platform, however, they don’t seem to provide enough information when YouTubers get a strike for violating community guidelines. It is therefore recommended that you familiarise yourself with the community guidelines before you launch your channel and then check for updates to the guidelines on a regular basis.